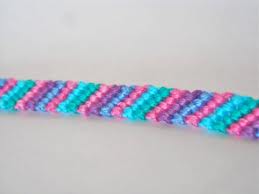 Friendship bracelets are handmade and are made by weaving and knotting designs (which is known as a form of macramé), a textile-making form that uses knotting rather than weaving or knitting techniques.

Whilst a friendship bracelet doesn’t have a clasp, it must be tied around the recipient’s wrist. The idea behind this is that a friend paid for it with the hard work and love that made it; and the recipient repays the friend by honouring the work.

Depending upon the colours you select, the bracelets can be worn by both male and female crafters. In modern today, most friendship bracelets are worn by girls and their friends.

There are many different styles and patterns to a friendship bracelet. Pattern names vary slightly depending on location; complexity and by simplistic design, but are overall very similar to each other. The following list contains a vast range of styles. Some patterns are similar others are significantly different alongside the complexity, the more pattern there are to a bracelet the more complex it is. 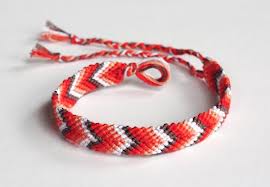 In future articles, I will demonstrate how to apply the four basic knots in how to make a simple bracelet for your friends, family and love ones.